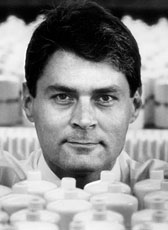 Statistics bear out David Farley’s ongoing success as head of Sprite Industries, a market leader in the showerhead filter market niche of the water treatment industry.

In its latest annual Housewares MarketWatch summary in January, the International Housewares Association reported showerheads as the hottest sector in the personal care category for the second year in a row, showing a 39.0 percent increase in year-over-year sales in 2001. Water filtration devices and replacement filters, listed as home environment appliances, came in at 24.5 percent growth in the same period, with more positive statistics reported throughout the year.

Farley’s statistics mirror those. He says annual growth of the Corona, Calif., company’s sales is generally in the 25 percent range. It’s produced 3-5 million shower filters so far. They make up 80 percent of sales, with the balance in precision water test instruments and demonstration kits. He points out Sprite got into shower filters in an unusual way nearly 20 years ago.

It was 1985. A gentleman in Atlanta owed the company $20,000 and his check bounced; so Farley’s father and Sprite founder, Fred, who passed away in 1994, headed out to collect the debt. He returned with a new check and a prototype of a showerhead filter the size and weight of a bowling ball the man had given him that promptly got tossed on a shelf in a back room. That check bounced also and a couple weeks later, the man’s body was found in the trunk of a car at Hartsfield International Airport.

“Now, if you were in my office, I’d pull out the newspaper articles showing this,” Farley said. “He was a con man. To my knowledge, they never found who bumped him off. But they did find out he had sold his company maybe 10 times over to various people.

“Of course, we didn’t do it because, being a California-based company first of all, we do believe in karma, including bad karma. And it’s stupid to kill somebody that owes you money because dead men don’t pay bills.”

Six months later while shaving as his wife took a shower, Farley was hit in the face by a wave of steam that smelled of chlorine and remembered the filter in the back room. Taking it home and installing it, he found it worked. The unit was filled with KDF, though, which made it too large and weighty to be of practical use. He tested a few other items with it, such as carbon, and finally settled on a media Sprite later patented, Chlorgon, which combined with KDF acts catalytically to convert the chlorine to chlorides that are washed away in the drain water. It also requires less media, allowing for a smaller, more stylish unit.

Today, Sprite production has shifted mostly offshore to Taiwan and China. It employs 25 people in assembly at its headquarters near Los Angeles. Farley sees patent protection as a major issue facing his market and is glad a new NSF standard for shower filters is about to be approved to help validate competing product claims.

Most Sprite products are certified to NSF standard #177 for shower filtration. For a list of Sprite Certified models, click the IAPMO logo.

Be the first to learn about our latest news and get exclusive offers.